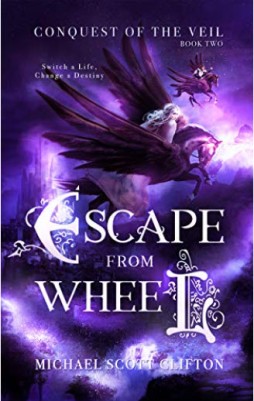 New Life, New World, New Problems
Alexandria Duvalier’s new life on the magical world of Meredith takes a shattering twist when her father, the Duke of Wheel, pledges her hand in marriage to the cruel lord, Rodric Regret. Desperate to escape his clutches, Alex flees the city with the help of her friend, Tell Tollet, a handsome lieutenant in the city guard. But their freedom is short-lived when Rodric’s brutal brother, Stefan, joins in the pursuit.
Hotheaded Prince Tal, heir to the throne of Meredith, has but one goal: kill the Dark Queen and destroy the Veil, the enchanted barrier which has ensnared generations of his people. He discovers a breach in the magical wall and leads an army through, bent on completing his mission.
When an unusual and potent magic calls to him, he follows its trail back to Alex. Thrown together by circumstances and chased across the wilderness by the ruthless Lord Stefan, Tal and Alex are drawn to each other by the greatest magic of all—love. Now they just need to stay alive . . .

Escape from Wheel by Michael Scott Clifton is one of those rare instances where book two outshines the first. Don’t get me wrong, The Open Portal, was a beautifully written book, but it could get so grotesque at times that I needed to stop for a moment and collect myself. Not to say that the sequel is all sunshine and daisies, but Clifton strikes a perfect balance of evil and suspense with love and hope.

In the first book, I wasn’t a huge fan of the characters’ strange names, but this volume had me wishing that Clifton took them a bit further. While the reader wouldn’t mistake Tell for Tal, the names were so similar that I expected Alex to slip up at least once. But perhaps our heroine is too clever to make such a rookie mistake.

I love how the author portrays this young woman with so much duality: a girl from our world and time transported to this ancient fantasy world, yet fitting in very well; a girl who researches and plots her own way but must rely upon a handsome man to help her stay safe. Alex might be a damsel in distress at times, but she puts up a hell of a fight and has hidden talents up her sleeve as well.

It’s been a while since I’ve read a good fantasy book, so one thing that stood out to me was Clifton’s vivid descriptions of, well, everything. While fiction books generally rely on dialogue to propel a story, fantasy books truly build worlds in your mind, and Clifton is a master architect and painter in one. You see the lay of the land, the buildings that tower above or crumble before you, and the colorful delights of the court set and fantastical creatures in nature. As someone who loves reading about food, I swooned over the descriptions of feast fare, as well as the roughing it recipes.

While the violence was my least favorite part of the previous book, I actually enjoyed the battles in this one. The gore wasn’t excessive and I particularly liked the cunning of various traps that were set up to help even out the unlikeliest of odds. The pace was just right, until I realized that I was super invested in the story and there were only a few more pages left. Alas, it appears I will have to wait again for the next installment of Conquest of the Veil.

I recommend this book to all you fantasy lovers out there. Definitely read the first book, The Open Portal, which has a George R.R. Martin vibe to it, and then follow up with this book that has an Arthurian legend meets Hunger Games groove to it.

Multi-award-winning author Michael Scott Clifton was a longtime public educator as a teacher, coach, and administrator. Professional credits include articles published in the Texas Study of Secondary Education Magazine. He currently lives in Mount Pleasant, Texas, with his wife, Melanie, and family cat. An avid gardener, reader, and movie junkie, Michael enjoys all kinds of book and movie genres. His books contain aspects of all the genres he enjoys: action, adventure, magic, fantasy, and romance. 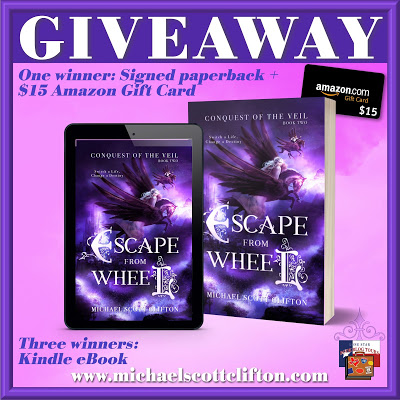 a Rafflecopter giveaway
https://widget-prime.rafflecopter.com/launch.js
CLICK TO VISIT THE LONE STAR LITERARY LIFE TOUR PAGE
FOR DIRECT LINKS TO EACH POST ON THIS TOUR, UPDATED DAILY,
or visit the blogs directly:

One response to “Review & Giveaway: Escape from Wheel by Michael Scott Clifton”