The seemingly never-ending Cabinda War (1975—) has left multitudes dead in its wake and thousands of children homeless and orphaned.

Jackaleena N’denga, a young Angolan girl, has become the sole survivor of one specifically brutal village massacre carried out by a band of guerrilla boy-soldiers.

Jackaleena’s resilience leads her to an orphanage on the west coast of Africa, known as Benguela by the Sea, where she and other children are taken in and protected. Her brilliant mind and endless questions capture the heart of her mentor, Margaret, who ensures her that her survival thus far—especially being the survivor from her village—must mean she has big things ahead of her. When the opportunity arises, she must find her purpose.

Not without a plan, Jackaleena stows away on a mercy ship that has made its yearly visit to the orphanage and is now preparing to return to America. Her journey takes her across the ocean, into the arms of New York City’s customs officials, and finally into placement in a temporary foster home in Texas.

Enter Alfie Carter—a workaholic, small-town detective who is also battling memories of his past. His life is forever changed when he meets a young African girl looking for her higher purpose.

Alfie Carter by BJ Mayo is a book that cannot be judged by its cover. Don’t get me wrong, the cover is quite beautiful, as is the heart of the story. But that does not begin to touch the darkness contained within its pages and the resilience of the characters to overcome it. If you were to pick this book up with the intent of reading a fluffy, inspirational novel, you would be rocked to your core.

The premise of the book is very interesting and, to be completely honest, had so much going on that I felt like this story should have been broken up into two, if not three, separate books. When we begin with the stoic Jackaleena breaking down over the brutal attack on a young girl, we know that we are about to hear a horrific story. For anyone who has kept up with the news in Africa, the crimes against humanity, especially women and young girls, is not a secret. Mayo’s ability to write from the perspective of this brave young girl is believable with its seemingly contradicting qualities of awareness and innocence. His treatment of the violence is handled with honesty and as much sensitivity as an author can use to describe such evil.

When we switch gears to follow around the Alfie character, you get to understand why the book is named after him. I imagine that the people in his town, and even his own wife, sometimes think that there’s not much complication to the man. But, thankfully, we the readers are privy to his innermost thoughts and feelings. A quick glance at Mayo’s biography has me thinking that Alfie most likely was not based on himself, but his familiarity with the character has me believe that he knows someone like Alfie in real life. The character is too complex and too visceral to not be based on a real person, even just a little bit.

I think the story could have hit even harder with some good editing, both on the line edit level and the overall shaping of the novel. Certain scenes just ran too long in my opinion, and the synopsis of the book misleads you into thinking that there is more interaction between Alfie and Jackaleena than we actually get to see. To be fair, it sounds like the sequel will definitely provide more of those details, but I was setup to believe that they would be revealed in this book, not the next. Also, with the amount of God and Christianity talk, I think that this book should have been labeled as a Christian novel.

I recommend this book to people who are interested in reading about a place very different from where most of us reside, but who are not squeamish about violence. This book makes you think about the things and the people you might take for granted. I look forward to reading more about these characters. Four stars for an uplifting story of hope and making new beginnings.

BJ Mayo was born in an oil field town in Texas. He spent the first few years of his life living in a company field camp twenty-five miles from the closest town. His career in the energy industry took him to various points in Texas, New Mexico, Colorado, Utah, Louisiana, Bangladesh, Australia, and Angola West Africa. He and his wife were high school sweethearts and have been married for forty-six years with two grown children. They live on a working farm near San Angelo, Texas.
Visit BJ Mayo at his website: https://bjmayo.com/

THREE WINNERS each receive an autographed copy of ALFIE CARTER. 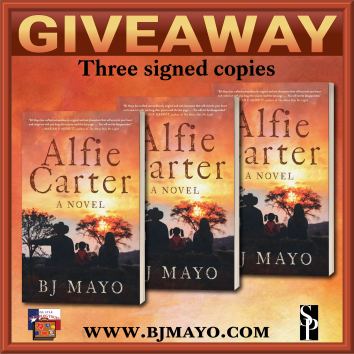 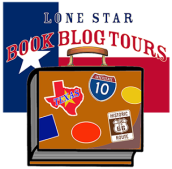