Every year, all across the planet, people simply vanish, completely disappear and are never seen again. Some areas of the world are well known for this phenomenon. Infinity’s Gateway opens with a very famous incident that took place just after the end of World War II with the United States Navy. The story then jumps to the present day with an unexplainable event that occurs off the coast of Florida, an event that cannot be ignored by the military.
The Navy ship Eclipse and its crew are sent to investigate, but after several days come up empty. Two days before returning to port, the event reoccurs, and the Eclipse is caught up in something it cannot escape. The Eclipse and its crew suddenly find themselves completely isolated, all communication lost, surrounded by a terribly hostile environment where each day is a struggle to survive. Infinity’s Gateway is an intense, action packed story of survival, self-reliance, and discovery.

“Infinity’s Gateway is an engaging science fiction thriller with tones of Michael Crichton Tom Clancy. To fans of the science fiction genre it will feel like an old friend with a surprising, and exciting new makeover.” —Joseph Mauceri, Executive Editor, Fearsmag.com.

Infinity’s Gateway by James S. Parker was a timely read for me since I have a Florida trip coming up and also have a Bermuda Triangle story of my own. When I was 8, I was on the maiden voyage of Carnival Cruise’s Ecstasy that sailed out to the Bahamas. When we were in the middle of the Bermuda Triangle, something shut off (the stabilizers perhaps?) and tons of people were getting seasick. I am not a conspiracy theorist but I am terrified of the Bermuda Triangle to this day because of the experience.

Parker’s characters obviously faced greater obstacles than getting seasick. I can’t imagine the terror of flying and suddenly losing all communication and instruments. I was invested from the onset with Parker’s choice to reimagine Flight 19 and the frenzied orchestration of people that were desperate to bring everyone home safely. You know that it’s not going to end well, but that doesn’t stop you from hoping that it will all work out.

When we are brought to the present, it feels like everyone is trying their best to not utter the name “Bermuda Triangle.” On one hand, I get it. These are military people who operate off of cold hard facts and not tabloids. On the other hand, Area 51… but I digress. While I felt that the scenes leading up to the actual departure of the Eclipse were a bit long, it was interesting to hear all of the different theories of what the gateway was. I won’t go into them because that kind of spoils the point of reading the book, but I liked getting a glimpse into the military mindset of things.

What really makes or breaks a story for me are the characters. I don’t have to like them necessarily, but they have to be interesting and believable. Brett Colton is compared to James Bond and I have to agree with that assessment. Colton appears to harbor very few secrets but at the same time, holds his true self very close to his vest. It’s kind of like how everybody knows what James Bond’s real name is (isn’t that a no no if you’re a secret agent?) but they don’t know what really goes on in his heart. There are other characters that are equally interesting as well that I hope get fleshed out even more in the next book.

While slow at times, I really enjoyed the series of events that occurred and could imagine them playing out on the big screen. I envision a Predator meets The X-Files type flick with a leading man that is unquestionably strong and manly with just a hint of sarcasm. Try as I might, I had trouble picturing anyone other than Michelle Rodriguez as badass Garrett. Parker doesn’t give much of a physical description for Father Ryan, but I couldn’t help but imagine a handsome, older yet physically fit priest. Forgive me Father for I have sinned.

There were so many different directions that Parker could have taken with this book and I am excited about the choices that he made. I truly look forward to reading the next book in the series. 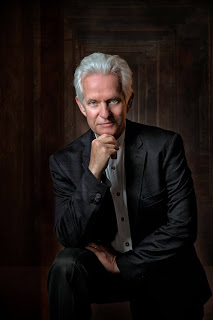 Every now and then author James S. Parker has a vision. And, when he does, he sees people and places off in the misty distance. Sometimes these visions are futuristic and filled with danger. Most often they are mystical, with good and evil and a cast of characters who beautifully represent both.

In his high school years James experienced a spine-tingling brush with the supernatural. That single event – complete with the sound of heavy footsteps and an invisible visitor – etched forever in his mind the idea that life is much more mysterious than we oftentimes admit — that the spiritual world is all around us, and that its impact on us cannot be denied.

Though he sees through a glass darkly, he writes as though he has been granted a glimpse into the unknown, one that has informed his novels and their powerful stories of good and evil and the struggles we all face every day to assure that good wins.

Infinity’s Gateway, the first book in a fascinating sci-fi adventure trilogy, is his latest work. James lives in San Antonio, Texas with his wife Margaret. He is available for in-person and online book club visits. 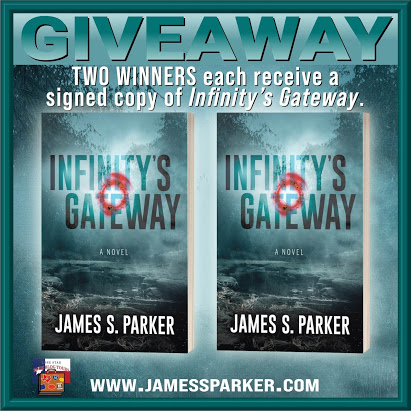 CLICK TO VISIT THE LONE STAR LITERARY LIFE TOUR PAGE
FOR DIRECT LINKS TO EACH STOP ON THIS TOUR, UPDATED DAILY
or visit the Blogs directly: