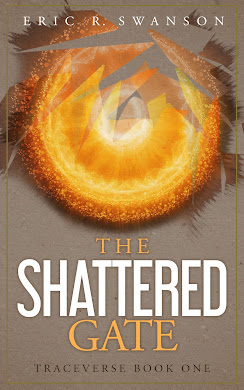 They selfishly pillaged Earth and made him a hybrid. Will his split nature spell the end of intergalactic abduction?
Half-human, half-Ceran, Micah Trace yearns for something more. Though the repetition and isolation of living as a body double for the King of Ceres is crushing, he’s grateful to be treated better than the other genetically engineered humans. But when he discovers the ailing plight of his ancestors, he heeds the calling and cleverly insinuates himself into a dangerous mission across the galaxy.
Fearing their plan to repair a failing transportation gate might lead to disaster, Micah uses his experience mimicking the king to steal the forbidden authority he’s assumed for so long. But with ulterior motives darkening the depths of space, he may not survive to see the centuries-old connection between the planets repaired.
Can the royal mimic win control of the ship before they’re lost to the vacuum’s void?
The Shattered Gate is the thought-provoking first tale in the science fiction Traceverse Saga. If you like character-driven action, high-tech military defense systems, and intriguing political powerplays, then you’ll love Eric R. Swanson’s interstellar adventure.
The Two Gates 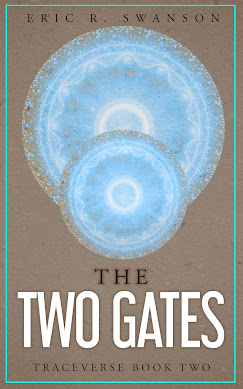 Born to serve. Trained to lead. Can a man of two species bridge the critical gap between his peoples?

2454. Micah Trace’s half-human heart races as his expedition approaches Earth. Taking leadership of a one-way-trip from Ceres, he fears the memory of a centuries-old mass abduction means they’ll face a hostile reception. And his desperate claim of a shared ancestry falls on deaf ears when the traumatized Earthers greet them with suspicion, capture, and interrogation.
With relations treading a knife’s edge, the offworld ambassador finally proves his genetic roots and convinces the nervous population to repair the stargate and reconnect their worlds. But some resent alien interference in the planet’s affairs, and Micah suspects that they may be willing to kill to ensure his mission’s doom.
Can the hybrid herald unite his two species before the past destroys their future?
The Two Gates is the thrilling second novel in the science fiction Traceverse Saga. If you like complex interplanetary politics, stunning character revelations, and pulse-pounding action, then you’ll love Eric R. Swanson’s galactic tale.
CLICK TO PURCHASE
THE TRACEVERSE SERIES!
The Shattered Gate, Book 1
│Amazon│

The Two Gates by Eric R. Swanson is book two of the Traceverse Saga, but it is the first book that I have read by this author. I am always a little nervous about reading a sequel without having read the prior book first. But I immediately felt immersed in the story and the different characters in such a way that it felt like I was reading a standalone book.

I have to admit that although I have read a number of science fiction novels, this is the first time that I have encountered an alien-human hybrid race. I am sure that if you think of most alien books and movies, the aliens usually come to earth wanting to wipe out the humans and steal earth’s resources. But in this book, the humans are the precious resources. And no matter where you stand on the notion of alien abductions, I am pretty sure that most people will agree that only a handful are taken for experimentation purposes typically.

So I can only imagine the horror of witnessing one hundred thousand people being taken and the aftermath of such a loss. And while Swanson’s writing quite possibly aims to echo moments in history such as slavery, mass genocide, and acts of terrorism, one might be able to understand the human tendency to mistrust the outsider and the impulse to shoot first. This thought shocked me because even now, social injustices still happen every day and we clearly have not learned our lesson from history. Swanson’s use of the history class to show us the civilian reaction to the current event made for a much more riveting literary device than simply pulling us away from the political scenes and plopping us unceremoniously among random people conversing about the happenings.

The story had a good pace and I liked how it shifted physically from one place to another to present the reader with different points of view. As mentioned before, while I could relate to the human reaction to everything going on, it was the hybrid characters that I felt most sympathetic toward and I enjoyed their different personalities and friendships with each other. I suppose as an Asian American woman born in the United States, I still feel foreign at times, especially when racial tension runs high in our nation. And I didn’t feel at home whenever I traveled to my parents’ home country either. So I could definitely relate to the struggle of figuring out where one belongs.

I highly recommend this series to any science fiction lover. I plan on doubling back to read book one, The Shattered Gate, and eagerly await the third book in the series. 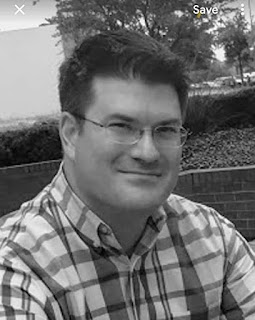 Eric Swanson was born in September of 1981 in Chicago, IL and his entire life has been spent engrossed in stories. Growing up in a Minneapolis, MN suburb, Eric developed a deep appreciation for stories with a wide scope. From being frightened by Stephen King’s IT to being enthralled by Orson Scott Card’s Ender Wiggin stories, the written word of others grabbed Eric and often refused to let go… Even after he finished the first reading of a book. Several of his personal copies of favorite novels have endured many many readings. From an early age, Eric was a fan of all things science fiction with a leaning toward the dystopian and post-apocalyptic. The future fascinates Eric to no end, be that a realistic or wild-eyed and farfetched future. While he annually binges Battlestar Galactica (04), he dreams of worlds, people and happenings yet to be written. Eric lives in Austin, Texas with his wife, two children and a pair of Goldendoodles. They sometimes Tweet for him…
◆WEBSITE ◆ FACEBOOK ◆ TWITTER ◆
◆ AMAZON◆  GOODREADS  ◆INSTAGRAM ◆
CLICK TO VISIT THE LONE STAR LITERARY LIFE TOUR PAGE
FOR DIRECT LINKS TO EACH POST ON THIS TOUR, UPDATED DAILY,
or visit the blogs directly:

2 responses to “Review: The Two Gates by Eric R. Swanson”