Tag Archives: Before the Rain Falls 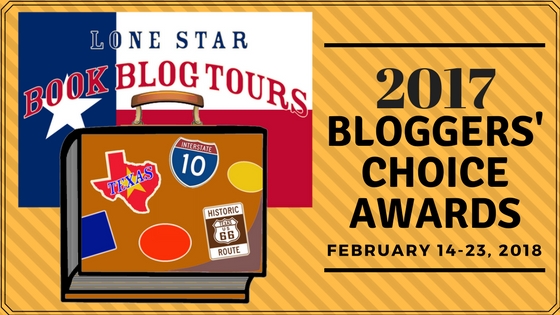 The Lone Star Book Blog Tours team has voted, and the results are in!  From Best Fiction to Most Engaged Author, we have seventeen awards to hand out to the awesome Texas books and authors featured on Lone Star Book Blog Tours in 2017.
From February 15-23, 2018, please join us as we hop around the LSBBT blogs and share the winners, runners-up, and shortlisted titles. Don’t miss it! 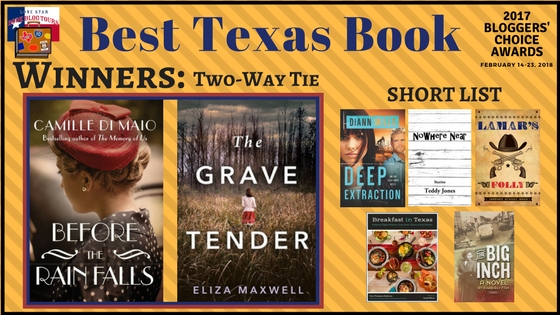 Click to learn more about:
Before the Rain Falls by Camille DiMaio
The Grave Tender by Eliza Maxwell
Deep Extraction  by DiAnn Mills
Nowhere Near by Teddy Jones
Breakfast in Texas by Terry Thompson-Anderson
Lamar’s Folly by Jeffrey Kerr
The Big Inch by Kimberly Fish

Come back tomorrow for the next award announcements!

Promo & Giveaway: Before the Rain Falls by Camille Di Maio

After serving seventy years in prison for the murder of her sister, Eula, Della Lee has finally returned home to the Texas town of Puerto Pesar. She’s free from confinement—and ready to tell her secrets before it’s too late.
She finds a willing audience in journalist Mick Anders, who is reeling after his suspension from a Boston newspaper and in town, reluctantly, to investigate a mysterious portrait of Eula that reportedly sheds tears. He crosses paths with Dr. Paloma Vega, who’s visiting Puerto Pesar with her own mission: to take care of her ailing grandmother and to rescue her rebellious younger sister before something terrible happens. Paloma and Mick have their reasons to be in the hot, parched border town whose name translates as “Port of Regret.” But they don’t anticipate how their lives will be changed forever.
Moving and engrossing, this dual story alternates between Della’s dark ordeals of the 1940s and Paloma and Mick’s present-day search for answers―about roots, family, love, and what is truly important in life.
Check out the book trailer!
Praise for Before the Rain Falls:
Still wiping away tears! Before the Rain Falls is simultaneously heartbreaking, hopeful, and joyous: a story of complex characters with varied pasts and bright futures. Loved it! – Jennifer B. on Goodreads
This novel takes readers on an emotional, fast-paced, ride through one sister’s journey to self, redemption, and the true meaning of “freedom.” – Nicole W. on Goodreads
There is romance, mystery, and secrets that are kept till the very end that will have you not wanting this beautifully written story to end. – Carol B. on Goodreads
CLICK TO PURCHASE 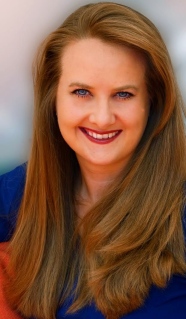 Camille recently left an award-winning real estate career in San Antonio to become a full-time writer. Along with her husband of 19 years, she enjoys raising their four children. She has a bucket list that is never-ending and uses her adventures to inspire her writing. She’s lived in Texas, Colorado, Pennsylvania, Virginia, and California, and spends enough time in Hawai’i to feel like a local. She’s traveled to four continents (so far), and met Mother Teresa and Pope John Paul II. She just about fainted when she had a chance to meet her musical idol, Paul McCartney, too. Camille studied political science in college but found working on actual campaigns much more fun. She overdoses on goodies at farmer’s markets (justifying them by her support for local bakeries) and belts out Broadway tunes whenever the moment strikes. There’s almost nothing she wouldn’t try, so long as it doesn’t involve heights, roller skates, or anything illegal. The Memory of Us is Camille’s debut novel. Her second, Before the Rain Falls was released on May 16, 2017.