Courage in Patience Excerpt: The Patience Trilogy by Beth Fehlbaum

Tenacious 14-year-old Ashley Asher claws her way back to normalcy after enduring six years of an unimaginable Hell. Uprooted from her negligent and selfish mother, Ashley finds solace in the safety of her father’s home. Building a relationship with her stepmother, she’s finally able to open up and confront the past that haunts her.

With the help of her stepmom, therapist, and a group of troubled adolescents, Ashley battles her demons, struggling to find the normal teenage life she’s always wanted. Can Ashley find the strength and courage to overcome the horrors of her past while fighting for the future she so deserves?
PURCHASE LINKS:      AMAZON      BARNES & NOBLE

Hope in Patience continues the story. . .
Hope to heal.
Hope to grow.
Hope to evolve.

Still shattered from the horrific events of her childhood years, 15-year-old Ashley Asher is barely holding it together. Battling her vicious and vile mother who still sees her as the villain and not the victim, Ashley’s stuck in a cycle of self-injury and self-hatred as a result–despite the many people who trying to pull her out of it.

Adolescence is hard, but throw in a new school, a new family, and a father she hardly knows, Ashley’s need for self-destruction and pain intensifies. Her new therapist, Dr. Matt, may be unconventional with bizarre antics, but he’ll do whatever it takes to pull Ashley out of the doldrums. Ashley just wants a crack at normalcy. But can her counselor and the friends and family who love her teach her that “crazy is the new normal” and that nobody has it easy?

Truth in Patience concludes the story. . .
Truth in the past.
Truth in reality.
Truth for tomorrow.

Finally adjusting to life in small town Texas, Ashley Asher sees a glimmer of what happiness really is. Even her new relationship with the attentive Joshua Brandt shows promise of a first romance. But Ashley’s fear of intimacy after years of unspeakable abuse may cause friction and distance in their relationship.

Determined to prove to her that she’s healing, Dr. Matt, her beloved therapist, shows her that “life is messy.” And he doesn’t know how messy it is about to get. When her mother decides that Ashley belongs back in their hometown with her, Ashley is forced into another family feud that she isn’t prepared for. Refusing to leave behind the new life she created in Texas, Ashley and her mother go head-to-head. But can Ashley finally find the courage and strength to battle her demons when her mother might be the biggest demon of all?
PURCHASE LINKS:     AMAZON      BARNES & NOBLE

EXCERPT from Courage In Patience

Book One of The Patience Trilogy

I watched for light. Light means it’s morning, I made it through another night and I could open the door, crawl into the cool air and—Shit! Seemed like something sharp—who knows what? —always jabbed my outer thigh. I yelped—clapped my hand over my mouth. If he hears me, I’ll lose the only safe place I have.

What time is it? God, how hot is it in here?
I was inside a stuffy black space normally reserved for storing clothes, tornado sheltering, and kids playing hide-and-seek, but that’s for normal people—God, the sweat stings my eyes! I swiped it away and shifted slightly, tried to keep my legs from going to sleep again.

“Don’t make me come in there!”

“I’ll be back in two minutes, and your feet better be on the floor!”

I pulled myself over the intentional mess covering my closet floor, turned the doorknob-so-carefully-and-silently, inched the door open, checked that I am in fact alone, threw myself forward onto the carpet, and breathed in great gasps of cool air. I yanked the alarm clock by its cord and slapped at the Off button until the BEEP-BEEP-ing stopped.

Mom hollered through the door: “Ashley, are your feet on the floor?”

I lifted my head and thought, My whole body’s on the floor, but I answered simply, “Yeah.” I grimaced at my sweat-soaked pajamas and allowed my head to fall back to the carpet. I felt gross, needed a quick shower, and every inch of me hurt.

I crawled to the side of my bed, pulled myself to my feet, and stomped to the bathroom to wake my tingling legs.

I closed the door, pull out the drawers on opposite sides of the cabinet, jelly-rolled a couple of king-sized bath towels, and shoved them between the drawer and door on either side of the counter dividing my room and the guest bedroom. Now nobody can open the doors .

I came up with that trick a couple of years ago when I was desperate to shower in private. It started when someone began punching a hole in the guest room’s bathroom door. I say someone because no one believed me when I said it had to be someone else, because it wasn’t me.

The first time Mom saw the DVD-sized peephole, she lost her shit. I denied hitting the door and showed her my hand: wouldn’t there be cuts on it if I put my hand through the door? But she opted to believe someone’s story—not mine, by the way— that I lost my temper and slammed the door into the towel rack: that’s why my hand looked fine.

She hired a handyman to make repairs, and within a day, someone smashed a hole through the door again. I tacked a towel over the opening. The next day, the towel and my thumbtacks were gone, the hole was even bigger, and I was grounded for weeks. Mom took my phone—I’ve never gotten it back—and both she and my stepfather, Charlie, lectured me for being an ungrateful, spoiled child who did not appreciate the home they gave me.

Lather, rinse, repeat, until every towel was gone except the washrag I hid in my room so I had something to dry myself, and I nearly passed out from shock the day I stepped from the shower and saw an unblinking eye staring back at me through the hole in the door.

I knew that eye too well, since it and its twin stared openly at my chest.

Sometimes those eyes and the rest of their nasty self “just happened” to go swimming in our pool at the same time I did, and observed me from the deep end through a swimming mask.

My mind and body did what they always do when I freak out: a sound— “Whoosh”—filled my head–like putting a seashell up to my ear—and I froze. This feeling was not new, by the way: I had been mentally checking out and freezing for as long as Charlie, the owner of those grayish green eyes, had been feeling me up in the dark: six long years. I was nine when it began, and I wondered if I’d live long enough to turn eighteen and could move out.

I have to assume that Charlie stopped punching the door for the same reason that hunters hide in deer blinds. Removing the door would take away his cover.

That’s when the lockable doorknobs were replaced with ones that don’t lock, and that’s when I noticed–between frantic bouts of scrub-scrub-stop-slide-the-shower-door-open-to-check-to-make-sure-I’m-still-alone—that the bathroom door on the guest room side was open a crack.

As usual, I “Whoosh”-ed, froze, and mentally checked out. But later, when my mind was working again, I thought of the towel-between-the drawer-and-door trick, and to ensure that I always had towels to “lock” the doors, I took a couple of king-sized ones from Mom and Charlie’s bathroom. I hid them between my mattress and bedspring.

The bathroom filled with steam. I shimmied off my pajama bottoms, snatched them off the floor, and used them to clear a circle in the foggy mirror. I leaned in close, studied my face, and forced a smile. My eyes filled with tears and I blinked a few times, then tested the doors one more time to make sure they couldn’t be opened.
So.

I stepped into the shower. 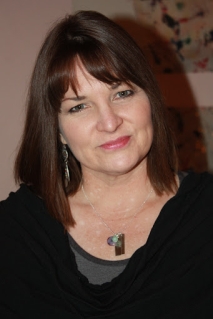 In addition to writing Young Adult Contemporary Fiction, Beth Fehlbaum is a secondary English-Language Arts teacher who frequently draws on her experience as an educator to write her books. She has a B.A. in English, Minor in Secondary Education, and an M.Ed. in Reading.

Beth is a featured author on the 2015-2016 Spirit of Texas Reading List- High School. She is the author of the Kirkus Starred Reviewed Big Fat Disaster (Merit Press/F+W Media, March 2014) and The Patience Trilogy: Courage, Hope, and Truth (Steady On Books, 2016).
Beth is a member of the RAINN (Rape , Abuse, Incest National Network) Speakers’ Bureau. She has a following in the young adult literature world and also among survivors of sexual abuse because of her work with victims’ advocacy groups. She has been the keynote speaker at the National Crime Victims’ Week Commemoration Ceremony at the Hall of State in Dallas, Texas and a presenter for Greater Texas Community Partners, where she addressed a group of social workers and foster children on the subject of “Hope.”

Beth is a survivor of a traumatic childhood, like Ashley in The Patience Trilogy, and the day-to-day manager of an eating disorder much like Colby’s in Big Fat Disaster. These life experiences give her a unique perspective, and she writes her characters’ stories in a way meant to inspire hope.

Beth lives with her family in the woods of East Texas.