The time is the eve of the First Gulf War. The place an abandoned World War II emergency landing strip for heavy bombers, nestled amid the near countless miles upon miles of wide openness in West Texas.

Here a climactic battle will be fought, while the rest of the world focuses on what would become known as Operation Desert Storm.

But in some ways, the stakes here are even higher as men from other places and past conflicts gamble all that they are, and all they ever were, to prevent a catastrophic terrorist attack unthinkable before on an American city.

One group seeks wholesale slaughter, the murder of helpless civilians on a massive scale. The other strives to stop this evil in any way possible, and by whatever means necessary.

The key to either side’s success or failure?

One old Boeing B-17G Flying Fortress, an enduring symbol from another war and ensuing catastrophe of a different era. This relic of a not so distant past is named ‘The Uvalde Raider,’ and this is its story… 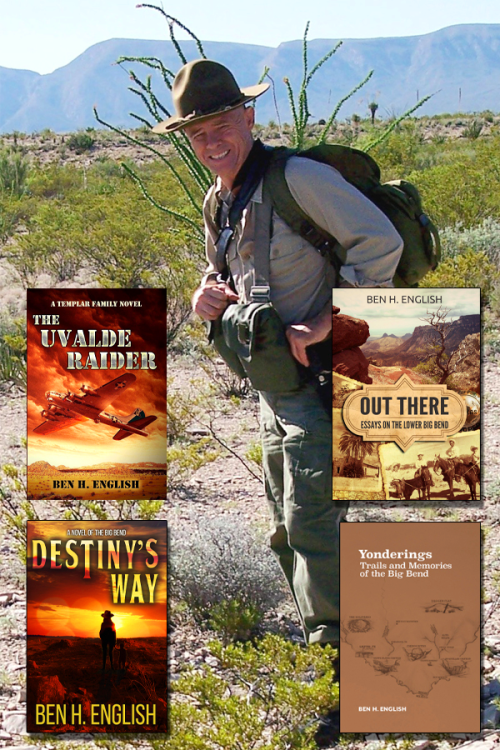 This was my first historical novel in the planned series of twelve framing the Templar clan. Set in the lower Big Bend; it is an adventure story, an old-fashioned romance, and a tale of the supernatural. Like my other historical fiction, there are a great number of facts contained of regional interest. When I write of a trail, creek, hill, fence line, tinaja, spring, pour off or abandoned ruin, most likely it is there.  Or at least it was. The manuscript led to a long term, multi-book contract.

Though the plot itself is fiction, most every element that makes up the story has a basis in fact. Many of my readers tell me this is my finest work yet and has set them to the task of learning more about those aforementioned elements. They also say the story made them proud to be a Texan as well as an American, and that pleases me most of all. You can’t go too far wrong with that kind of assessment.

Yonderings: Trails and Memories of the Big Bend

Yonderings was my first effort ever and was picked up by a university press on my first try. I wrote this book from memories of being raised in the lower Big Bend, and of some of my journeys there over the intervening years. Even after nearly four years the book continues to sell well, some have even used the word ‘classic’ in regard to it. But in reality, there was no work involved. It was a labor of love…

Out There:  Essays on the Lower Big Bend

One might consider this a follow on to Yonderings, but with nearly 160 color photos and sixteen area maps hand drawn by myself. The book has eighteen chapters, each speaking of a different locale or subject in the Big Bend. Most of the spots described are somewhat remote, and a couple nigh forgotten save by a very few. There were a couple of firsts involved here, it was my first book offered in hardbound and first adapted to an audiobook. My publisher talked me into being the narrator, so listen at your own risk.

Ben H. English is an eighth-generation Texan who grew up in the Big Bend. At seventeen he joined the Marines, ultimately becoming a chief scout-sniper as well as an infantry platoon sergeant. Later he worked counterintelligence and traveled to over thirty countries on four continents.
At Angelo State University he graduated Magna Cum Laude along with other honors. Afterwards Ben had a career in the Texas Highway Patrol, holding several instructor billets involving firearms, driving, patrol procedures and defensive tactics.
After retirement he decided to try his hand at writing. His first effort, Yonderings, was accepted by a university press and garnered some awards. His second, Destiny’s Way, led to a long term, multi-book contract.  This was followed by Out There: Essays on the Lower Big Bend and now his second fictional work, The Uvalde Raider.
His intimate knowledge of what he writes about lends credence and authenticity to his work. Ben knows how it feels to get hit and hit back, or being thirsty, cold, wet, hungry, alone or exhausted beyond imagination. Finally, he knows of not only being the hunter, but also the hunted.
Ben and his wife have two sons who both graduated from Annapolis. He still likes nothing better than grabbing a pack and some canteens and heading out to where few others venture.
Just as he has done throughout most of his life…
Find out more about Ben English’s Adventures on Facebook,Amazon Author Page, or visit Ben on his Website

Click to visit the
LONE STAR LITERARY LIFE TOUR PAGE
for direct links to each stop on the tour, updated daily, or visit the blogs directly:

One response to “Series Spotlight & Catalog of Books: The Uvalde Raider by Ben H. Engli”